We have great day trips that we offer mostly from the Arusha Town which is the base town for most safaris in Tanzania but also we offer some of these from Mwanza and from the neighboring Mugumu, Serengeti and Musoma townships in around the Lake Victoria region. These day trips can be any to any of our best hotspots including a day trip to Arusha National Park, Tarangire National Park, Lake Manyara National Park, Maji Chemka  ( Hot Springs), to cultural tours to Ilkiding’a, Mulala Cultural visit, a visit to the Masai villages of Monduli juu or even further afield to Longido.

Please sample some of our best Day trips here below:

Pickup from your hotel at Arusha or Moshi, as early as 06.30 hrs in the morning by our driver you will embark on a 3 hours drive to the Ngorongoro Conservation Area. We will cross the Great Rift Valley on our way and ascend the stunning escarpments of the rift valley with a brief stop at the Rift Valley Escarpment’s view point (if you wish). We will have a brief stop at the Loduare Main Gate where we will undergo the registration process briefly for some 5 to 10 minutes then proceed to the Crater Rim where we will make another short brief stop to have nice and stunning views over the Crater floor as well as take photos. After taking some photos we descend to the Crater floor and spend the whole day doing game drives inside the world’s unbroken Caldera which is also one of the UNESCO world heritage sites found in Tanzania. Ngorongoro Crater is famous for spotting a lot of animals at a very close range including the Big Five with just a little luck in one day. Other animals that can be spotted include; zebras, hartebeests, wildebeests, impalas, gazelles, topis, hyenas, jackals, and many birds including the flamingos. Picnic lunch will be served at one of the sites in the Crater floor then continue with game drives until 15.30 hrs or 16.00 hrs when we drive out and proceed back to Arusha arriving early in the evening with lots of memories and photos to share!

Early in the morning at around 06.30 hrs you will be picked by our guide who will transfer you in a 4×4 safari jeep across the Ma 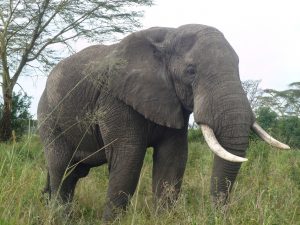 asai Steppe to the Tarangire National Park which is about 2 hours away from Arusha. After registration at the parks Gate and headquarters you will enter the park for a full day of game drives inside this vast park famous for the gigantic baobab trees and large herds of elephants. Tarangire National Park; the fifth largest national park in Tanzania is one of the few places you can spot herds of elephants in large numbers of up to 300 in one herd. The park is fed by a seasonal river that ensures a constant supply of water almost throughout the year making game drives along the banks quite an interesting affair. Among the animals that you can see in the park includes the elephants, giraffes, zebras, buffaloes, prides of lions, leopards, cheetahs, baboons, the rare long necked gerenuks, and many more plains game. Tarangire is also a great place for bird watching with many species including rare ones like the Ashy sterling which can only be seen in this park in northern Tanzania safari Circuit. Lunch will be served at one of the picnic sites. At around 16.00 hrs you will embark on your way back to Arusha with great memories!

We will pick you up from any point in and around Arusha town at around 06.00 to 06.30 hrs and we drive across the Masai Steppe and into the base of the Great Rift Valley up to the Gate of Lake Manyara National Park for a day trip in this amazingly beautiful little gem of a park. A few minutes will be spent at the park’s main gate for registration and park entry fees payment then you will venture into the park for a whole day of game viewing fun. The Park is as the name suggests consists the Lake Manyara which covers 2 thirds of the park with lots of aquatic birds to see including Egyptian geese, the soaring flamingos, herons, ibises, and many more, the park having over 400 species registered. As you enter the park right from the gate you are greeted by sights of mischievous baboons and monkeys which rule this park because of the forestry nature of the park. The park is famous for being evergreen because of the many underground water streams that dot the park as making the park very beautiful throughout the year. The Park is more famous for the legendary tree climbing lions and with little luck you might spot them as they laze on top of the branches of the acacia trees and the sausage trees (Kigelia Africana). Apart from these other animals that can be spotted include zebras, herds of elephants, Defassa water bucks, the shy dik diks, Maasai giraffes, warthogs and many more animals. Visiting the Maji moto hot water springs is another interesting point of the day trip to Lake Manyara. Later in the afternoon at around 16.00 to 16.30 hrs we embark on our way back to Arusha arriving at around 18.00 hrs.

Want to visit Lake Manyara in a longe multi day safari in Tanzania? Why not check out our Tanzania budget safari packages.

In the morning at around 07.30 hrs to 08.00 hrs you will be picked up from your hotel/pick up point and drive a short distance to Arusha National Park; the closest park to Arusha town which is the base town for safaris in the Tanzania’s Northern Safari Circuit. On our way we will pass the ‘little Serengeti’ where you will catch a glimpse of herds of buffaloes, giraffes, zebras and warthogs in the small patch of Savannah. Lunch will be enjoyed at the shores of the Momella Lakes with beautiful sights of flamingo flocks and the views of the majestic Mt. Kilimanjaro. In the afternoon if you wish you can continue with a game drive around the different habitats of this lush green and truly beautiful park or accompanied by an armed ranger you can go on a hike in the lush forests in the slopes of Mount Meru. You will get to chance to spot black and white colobus monkeys which are indigenous you this park or the vervet monkeys. The park is home to other animals including buffaloes, the shy duikers, the elusive leopards and substantial herds of other antelopes. Later in the afternoon you will drive out of the park and dropped back at your hotel or home.

Get in touch with our safari experts for free advice and customization of your next best Tanzania Safari.