Tarangire National Park is one of the best wildlife parks in Northern Tanzania safari circuit. An hour and a half drive from the safari base town of Arusha, Tarangire National Park is third largest national park in Tanzania. This National park measures some 2850 square kilometers and is highlighted with Baobab trees and the largest herds of Elephants during the dry months. The Tarangire River is the meeting point for all the animals during the dry months and draws together the unbelievably large herd of elephants, as well as other larger mammals like zebras, giraffes, buffaloes, smaller antelopes like gazelles, elands, beisa Oryx as well as the predators. We have included Tarangire National Park in many of our most popular Tanzania lodge safari packages.

During the rainy months of April and May some of the herds of elephants migrate out of the park to Simanjiro plains the Masai steppe due to water logging in the park. Other animals like wildebeests also migrate to the Masai steppe for rooting and foaling where there are mineral rich pastures good for the mothers and the newborns. 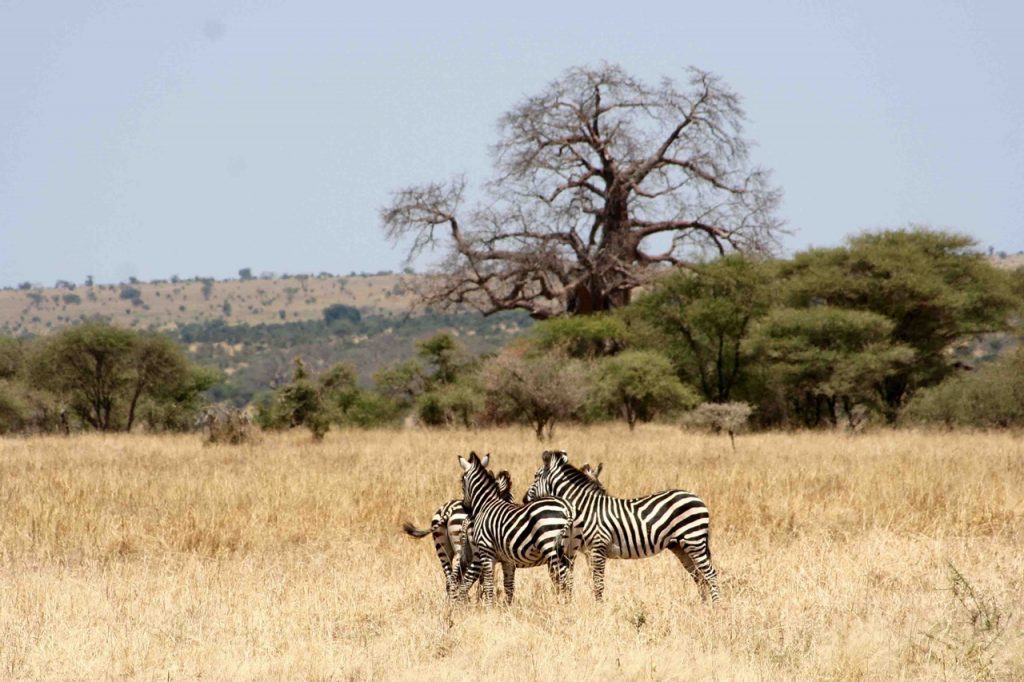 However there are resident animals that remain in the national park all the year round and this ensures the park can be toured anytime of the year. Perhaps the most interesting time to visit this national park is during the months of September through October when the herds of elephants migrate into the Tarangire making up to 300 strong families of jumbos, cows, bulls and calves moving together. Other animals that can be viewed in the national park include impalas, hyenas, lions, cheetahs, hyenas and the rare leopards.

The evergreen marshes are a perfect habitat for birds. More than 550 species of birds have been spotted in the park, including lover birds, rofous-tailed weavers, and ashy starlings among many more.

Around the Tarangire National Park walking safaris are can be arranged, and visitors accompanied by the guide and an armed ranger or Masai warrior, can experience the African wilderness by foot, apart from the usual game drives.

Just close to the park along the Arusha – Dodoma highway visitors can tour the rock paintings at Kolo and also visits to the animal skin wearing Barabaig tribesmen villages along the Dodoma Road.

Tarangire National park can be included in both short and long wildlife safaris to Northern Tanzania.

Please let us know if you wish us to arrange a visit to Tarangire National Park and its environs and we shall include that in your itinerary.

Some of the lodges and tented camps around Tarangire National Park includes:

Tarangire National Park is fed by the Tarangire river that flows throughout the year providing a lifeline during the dry season. During the dry season, many animals visit the river for water, making the variety of wildlife that can be spotted in this park almost comparable to Ngorongoro Crater. Tarangire safari can be easily combined with a visit to Ngorongoro Crater and Lake Manyara National park like what we have in our 3 days Tanzania lodge safari.

Tarangire has its own localized migration pattern whereby animals migrate from the park to Lake Manyara areas or Silalei Plains in the boundaries of Tarangire. The migration pattern is followed by most of the animals that live within and around the park. Animals and especially the elephants which are a major attraction in this park, migrate during the months of April – May (long rains season) from the park which has mostly the porous black cotton soil, which get muddy during that time. Animals tend to migrate outside the park where the soils are harder and drier making that season’s wildlife viewing questionable.

Tarangire’s elephant population is thought to be the highest concentration in the world with numbers reaching up to 3000 herds during the peak season and single herds reaching between 300 to 500 elephants a herd.

Apart from the elephants, during the peak season, you expect to spot animals like; zebras, buffalos, wildebeest Thompson gazelles, elands, cheetahs, lions, leopards, giraffe, buffalo, lesser and greater kudus, warthogs etc. Rare species that you may see with a little bit of luck include the oryx, the gerenuk and the dwarf mongoose.

Tarangire is also well known for its birds numbers. More than 500 bird species have been recorded in the park, including the Ashy Starlings which are endemic to this area.

What are the activities in Tarangire National Park?

Game drives for wildlife viewing is the main safari activity at Tarangire National Park, and the park can be visited individually as a Tarangire safari Tanzania or as part of a longer Tanzania safari package.

Apart from traditional Tanzania safari in Tarangire, the park now allows for walking safaris which can only be conducted during the day , and these are led by a trained armed ranger who is also a naturalist. No night walking safaris are allowed in Tarangire or anywhere in the Tanzania parks and reserves.

Yes Tarangire National Park allows for night game drives within the park’s boundaries. You however need to request for that well in advance because we need to arrange that for you through some of the lodges that are located inside the park such as; Tarangire Safari Lodge, but they only offer this for only the guests staying in their lodge.

Other parks offering night game drives within the park’s boundaries nearby include the Lake Manyara National Park.

The Dry season during the months of June to October is the best time to visit Tarangire N Park. This is because that is when the wildlife viewing is at its best. It is also the best time to visit other parks like Serengeti National Park for the wildebeests migration safari, so you can combine the Tarangire in a longer Tanzania safari tour itinerary. In the other months the park experiences less wildlife and therefore not the best place for anyone looking for high concentration of animals but for anyone who is looking for less crowds then this would be the best place to be during the other months of the year.

Tarangire is also known to have a high number of Tse Tse flies which can be a nuisance during the months of December to March. If you can you may skip this park and instead tour Ndutu Plains and Southern Serengeti for the breeding and calving season. Check out our Wildebeests Calving safari in Southern Serengeti and Ndutu here for 8 days.

During the ‘long rains’ season March to May the animals in Tarangire tend to migrate to the floor of the Great Rift Valley towards Lake Manyara as well as the grazing grounds of the Masai Steppe in areas like the Silalei Plains.

You can get more information regarding Tarangire safari from our able experts if you can contact us through email or give us a call , or even chat with us through WhatsApp messaging. We do not only offer tours in Tanzania, we also offer Kenya Safaris from Mombasa. Get in touch for more information!.