We offer climbing Kilimanjaro route through all routes and Marangu Route is by far the most popular route, which is attributed to the fact that it is the shortest route. The route takes only five days to go to the summit  at the minimum (to the summit and back), but you can also do the same Marangu Route with 6 days to better your chances of submitting by having an extra day of acclimatization.  It is also likely that people prefer this because it is the only route that offers accommodation in Mountain Bunker houses also referred as Mountain huts. The huts are set like dormitories with 6 persons sharing one hut at the maximum. The huts however have to be booked well in advance because they can accommodate a  maximum number of persons at any given time.

The Marangu route also known as the ‘Coca cola route’ involves a trekking distance of 96 Kilometers and like explained above it can be done better by doing it in six days that way allowing a day of acclimatization. That even increases the chances of reaching the summit.

At the Huts climbers also can buy some things like mineral waters, soft drinks, beers and chocolates, unlike other routes where they spend nights at Mountain Campsites.

This day involves approximately 5 hours of hiking time covering approximately 12 kilometers. On this first day of your trekking you will be picked from your hotel in Arusha or Moshi and rive to Marangu Gate which is also the headquarters of the Kilimanjaro National Park. Here while you go by your registration formalities, your porters will be assigning luggage among themselves and when you are all done you start on your uphill trek via a cleared ridge through the rain forest where apparently is the only place you are likely to encounter animals. Your guide is at your assistance but the porters walk faster and will be way ahead of you, and by the time you reach Mandara hut your home for today they will be there long before you. It is advisable therefore that you make sure you have your days pack with you containing at least your lunch, drinking water and some extra clothing. There is an alternative trail just a short distance from the starting point, please discuss with your guide whether to take or not to take this one. The trail joins the cleared one about one to one and a half hours trek from Mandara. Your dinner will be served at Mandara. Overnight at Mandara Hut.

This day involves approximately 6 hours of hiking time covering approximately 15 kilometers along with views of moor land vegetation. This morning as you leave Mandara hut you trail will pass through just a short stretch of rain forest, and there after it skirts the base of the Maundi Crater and eventually emerges to moorland a totally different habitat comprising the spectacular endemic giant lobelias of up to 3 meters height as well as the giant groundsel otherwise known scientifically as the senecio kilimanjari growing to a staggering 5 meter height. If you wish you can make a detour up the rim of this Maundi Crater where you will be rewarded by your first awe inspiring view of the Kibo Crater. If you are lucky to climb on a clear day especially during the dry season the Kibo Crater’s glaciers will be shining and glimmering in the African morning sun offering breath taking views that can only be experienced while climbing Mt Kilimanjaro. It is a rather long day and you will arrive Horombo hut for a hot water bath and some dinner before you retire to bed. Overnight at Horombo Hut.

Day 3 on the 6 days Kilimanjaro climb via Marangu is normally the acclimatization day and on this day; climbers use day to get used to the high altitude and help their bodies acclimatize with the weather. Usually hikers go for an approximately 3 hours hike up towards the Mawenzi bypassing the Zebra Rocks before hiking down for about one and half hours back to Horombo again. This hike is much recommended and on this day one is advised to move slowly and drinking a lot of water is recommended. It is advisable to go to bed as early as you can so as to get enough sleep and a good relaxation.

On this day you are in for a 6 hours ascent for approximately 15 kilometers through the alpine desert habitat. From Horombo you have two options to choose from to ascend to the Saddle; either the upper route also known as the right hand fork (which you used the previous day on your way to Mawenzi) and the Lower route otherwise known as the Left hand fork. The Saddle is the area between the Mawenzi and Kibo Peaks.

The Upper route is very barren and rocky and so the Lower route is the recommended one. Along this lower route you will pass through the last watering point at 4130 m along the Marangu Route and here you are advised to get enough water that you will need for the rest of your ascent until you start your descent after two nights. Mineral water is however available for buying at Kibo Hut. This day you will take early diner and you are expected to go to bed as early as possible in order to have enough relaxation because after all you will rise up before dawn to attempt the summit. Gear check is crucial, and you need your hiking poles, thermal clothing, and headlamp well in place for this memorable day later when you will conquer the highest peak in Africa!.

This is quite a long day involving some 8 hours for the approximately 6 kilometers up to the Summit and 6 hours descent covering about 21 kilometers. A typical Summiting day you will rise just before midnight and after bites of some biscuits and some tea or coffee you embark on your summit attempt and this day is a tough one but worthy giving it your best. Firstly you will hike up a rocky path up to Hans Meyer Cave at 5150m where you can take short break. From here you now embark on probably the hardest section of this route up to Gillman’s point at 5681 m. From Gillman’s point up to the Uhuru Peak you will encounter ice and this is where your Sunglasses comes in handy. At 5895 m the Uhuru Peak is the highest point in Africa and now you are here time to say Hurray! A session of photos and jubilation’s length will be determined by the weather conditions before you start you way down to the Kibo Hut. Here you take your breakfast and pack all what you left behind to proceed with your descent down to Horombo for about three hours down. At Horombo you can through in a mini party with some bottles f beer for those who drink, triggered by the feeling of success and ‘Mission completed’ but short lived because of the exhaustion of course. You will enjoy your last dinner on Kilimanjaro and retire to bed full of fond memories.

Approximately 6 hours you will descend about 27 kilometers down to the Gate passing the Mandara Hut to the Marangu Gate where you sing out and bid farewell to your crew who without them you could never had made it, they are so crucial than you can imagine! It is here at the gate where you will also receive an appreciation certificate of ‘been there done it’. Persons who have made it to the Gillman’s point receive Green Certificates and the conquerors of Uhuru Peak they get a Gold Certificate. You will board a waiting vehicle and off you take off to Moshi town or to Arusha town where you will check in to relax ready for your safari extension or Zanzibar beach extension. If you are leaving on this day you will be dropped at Kilimanjaro International Airport to take your international flight back home.

Other Routes include Machame Route Kilimanjaro

Price depends on number of persons. Please request for your best discounted price depending on how many persons are coming with you. 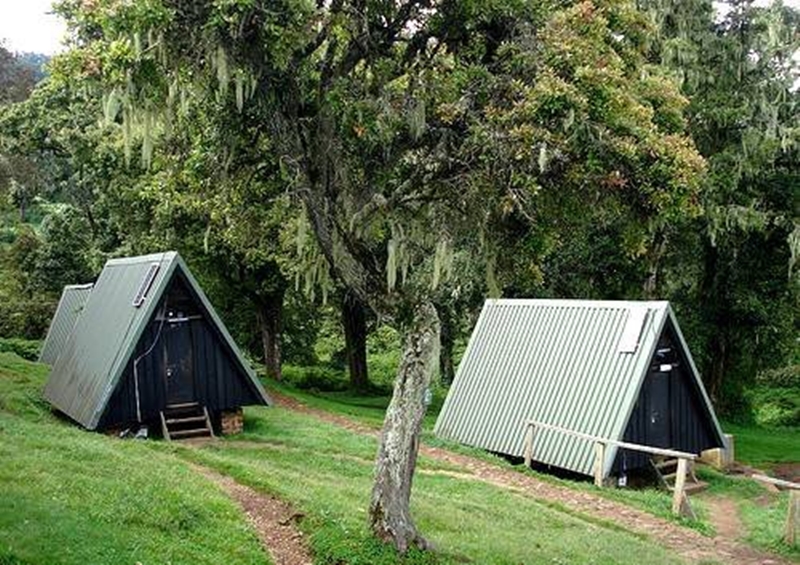 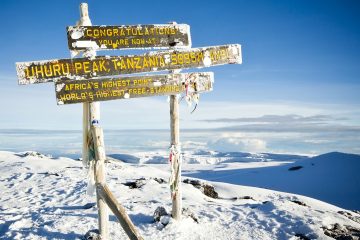 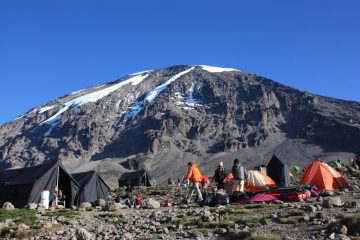 Machame Route; the most scenic of all
Starting from