The Tanzania Safari Calendar is changing fast as far as the Wildebeests Migration (also referred as the Great Migration), is concerned. Solomon one of our best safari guides and excellent wildlife spotters (not to mention one of our best bird watching guides) has just  returned from a 6 Days  Safari in the Northern Tanzania which included also the Serengeti National Park.

It was a customized 6 days safari for a couple of amazing honeymooners who decided to travel to Tanzania with us for their honeymoon. What Solomon has to say regarding the location of the wildebeests migration herds is that “the calendar has really changed nowadays”. As we engage in a little chit chat with Solomon in the office we all agree that the trends of the wildebeests migration locations has been changing for the last 3 years  which makes us wonder if indeed we should continue with the traditional notions of where the herds will be at a particular time. 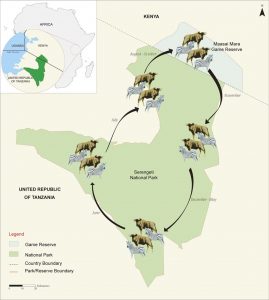 Traditionally it is believed that the wildebeests migration herds should at this time of the year be at the Northern Serengeti, areas covering Lobo, and Nologonja (Bologonya), having crossed from the Mara River on their way from the Masai Mara and having crossed the Loliondo Area, or at least they should now be at Loliondo which is a Concession Area just outside the Serengeti National Park. This isn’t the case though for this year and the herds were at Central Serengeti already by End October and many herds seemingly confused roaming the Ikoma area in the Northwest of the Serengeti National Park. It makes us wonder where they are heading to?

By Early December the herds should (traditionally) be at the Ndutu Plains after the short rains that come in October and November in the Serengeti, Ndutu Plains and Northern Tanzania in general. The rains at Ndutu normally attract the herds to the Lake Ndutu and the surrounding plains including the Lake Masek areas within the Ngorongoro Conservation area. This is the time they concentrate in this area for their breeding and foaling until End of March.

You may be interested in our safaris from Zanzibar at affordable prices.

From April and May the herds are traditionally in Central Serengeti and moving towards the Grumeti River in the western corridor, where they cross by early June and cross through the Ikoma and further to the northern Serengeti.

By the August traditionally the herds should be crossing the Mara River and into the Masai Mara in Kenya in search of greener pasture and water for survival.

The wildebeests Migration Calendar, Moving away from the norm

What we have been seeing the recent years is quite different though. Right now instead of the herds concentrating in Northern Serengeti and Loliondo Game Controlled area in the North Eastern sides of the Serengeti, they are already in the Central Serengeti and with more rains being experienced in the in Ndutu we expect them to be in Ndutu as early as the last week of November.

This reminds us of a colleague in the safari industry who once said “the wildebeests herds do not read the guide books, nor do they follow what you write in your websites and blogs”. Very funny!

One would wonder ‘so how can you tell where the herds will be in the my next Tanzania Safari?’ Just let the experts advise you on where the best place to stay is, and where to visit for wildebeests migration safari in Tanzania.